a tale of two weddings 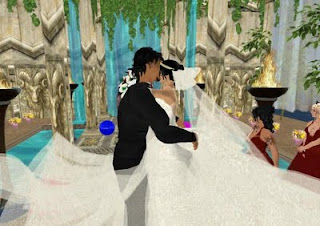 this is the first wedding i went to in Second Life. a couple of years ago.

the groom, Squiddy, was one of the first friends i made in SL, and the first avatar to hug me.

i was so surprised to find that when someone hugs you in SL you actually feel like you are being hugged!

the wedding vows were beautiful, as was the ceremony. it didn't last a year, but he did eventually find his true (SL) love.

last time i heard from them, he was professor of dark arts at Hogwarts (in SL).

this weekend i went to another wedding. also one of my early SL friends.

we first met when we showed up at the wrong time for a peace protest march, and had a long discussion about Yosemite's decision to use a wheelchair in SL, as she does in real life.

we spent a hilarious noobie afternoon trying to get a boat to work on what turned out to be the wrong kind of water.

Yosemite has gone on to work with designers fashioning better wheelchairs in SL and to push for SL venues to be wheelchair accessible.

she and her partner have a lovely house that Yose keeps remodeling -- one of her partner's vows was to put up with all the remodeling! -- and they are expecting a baby soon (in SL). they've never met in real life and don't plan to! 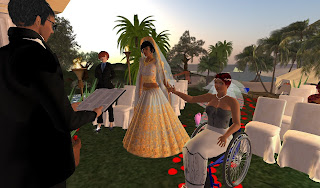