we didn't know ruth at all when we knocked on her door.
the vet said she had kittens, and we were looking for a kitten..
he said her landlord told her some of her cats had to go.
she had 26 or was it 32?
her house was small, run-down, unmowed,
yard full of dandelions,
and ruth herself, when she came to the door looked run-down and unmowed.
she was sweet looking and slight -- boney slight -- like my aunt emma
but unlike emma she had a warmth and friendliness that lit up her face,
weathered more than aged.
she welcomed us and took us to meet her cats.
inside they were everywhere.
i tried not to look at her scratched up legs,
imagining it must be from the cats,
but was probably from berry-picking.
all sorts of cats came over to greet her when we sat down outside.
she greeted each by name, and they responded.
we looked at some kittens, all adorable,
trying to decide,
and then out came a tiny long haired white kitten with big blue eyes.
well, of course, that was the one!  Our Kitten!
""oh " said ruth -- were we not supposed to see that one?
"well " said ruth, possibly thinking of her landlord.
"you can't take that one -- unless you take her brother too."
out came the brother - bigger, short-haired, white, blue-eyed.
well ok then, i will get a kitten as well.  we'll take two.
and so we ended up with silky white ticklewhiskers
and sunny jim ticklewhiskers!
a year or so later ruth stopped in to see them.
she looked at grown-up sunny jim and said
"he is the spitting image of his grandmother lulabelle!! "
No comments:

while researching info on Salazar's lands for the upcoming event in june, i stumbled across a tweet Sal sent about my tea room!
so here is a picture:
oh and yes that is Lucy, who is a woman of color lately, perhaps because i am reading The Immortal Life of Henrietta Lacks.
highly recommended!  an amazing book!  be sure to read it if you haven't already.
No comments:

barney: it's really dark in here. i hope the tall ones let us out soon.
hank:  it's your fault - you hit the door and made it snap shut.
barney: i'm getting hungry.
hank: i don't think they'll let us out.
barney: yes they will!
hank: i think they went on a trip like they did one time. only for longer.
barney: no they didn't!
hank: they're going to be gone a long long time. they probably left lots of food out for us.
barney: i'm hungry.
hank: but we can't get to it because YOU got us shut up in the bathroom and we can't get out!
barney: it's not my fault! you were jumping too! are we gonna die?
hank: one of us is.
barney: which one? me?
hank: with no food and water you'll die first 'cause i'm fatter and i can live longer.  then i'll eat you.
barney:waaaaaaaaaaaaaaaaaaaaaaaaa!
-- OH THERE YOU ARE!  DID YOU TWO SHUT YOURSELVES UP IN THE BATHROOM AGAIN?  YOU SILLY CATS!
No comments:

what to do with bin laden

my computer shut itself off
it had some important update thing going on for itself.
meanwhile, i'd left an unsaved note to myself
with a long poemy sort of thing
asking have you found your inner bin laden
and that it's important to do so
but then what --
don't want to kill off part of yourself!
bin laden's a smart energetic dude
if you find where yours is hiding
best plan is to turn all that energy
to something beneficial!
anyway, i didn't say it just right
and it was too long anyway
and now it's gone.
but i like the idea.
you know -- bin laden lives on
in each of us.
but most of us don't know him.
he hides out in a cave or mansion
and ambushes us from time to time
and we say omg how could i do/say
something like that!
5 comments:

mrs phoebe thinks they'd best be heading north to grab a good nest site.
mr phoebe says nah, nah, no hurry!
last year's nest was in good shape! we'll just fix up that nest.
piece of seedcake!
little did he know
last year's nest -- on top of the light fixture on my back porch -- is gone.
i did appreciate them eating up all the GIANT BARN SPIDERS we used to have BRRRRR!!!!
but not from atop our light fixture!

when the weather felt just like it does
just before we hear FEE-be!  FEE-be!
i cleaned away that old nest
and wrapped screening around that light.

all night i worried
those birds will come home to....no place to live!
so i built them a little platform!


and HOORAY!  when they came back
well she gave him a hard time for a week or so
but then, she relented, and in no time at all
had a nest on that little platform!

here's how to build one http://www.50birds.com/MPOpenPlatform.htm 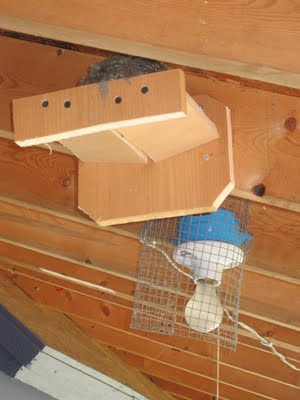