two separate stories of parents told to me this weekend, by guys who are older than 50 but not elderly. i love to hear people's stories.
does spring makes us think of our childhood?

1. my father's mother took in laundry and that's probably how he got polio as a child. he had no use of his legs and in order for him to function at all, they had to destroy his knees and ankles. he was like charles atlas from the waist up, so muscular from pushing himself around.  he made platforms to sit on and after he died we found a big box of casters in the garage -- those were his way to move. Me: how did he meet your mom?  they grew up next door to each other. knew each other all of their lives.

open the door
walk into sunshine, birdsong, flowerglow.
how could this happen?
have i these long cold months
been opening the wrong door?
~mudpie
1 comment:

a bird in the hand

could be the fever, or the cough syrups -- my sore tongue drove me to google "why is my tongue sore" because google knows everything about me.
it was worth it for the laugh when i got to the third possibility!!  and the last one could be of interest to Salazar, as it seemingly involves maps.

Searches related to why is my tongue sore
Vitamin deficiency
Any disease caused by chronic or long-term vitamin deficiency or caused by a defect in metabolic conversion, such as tryptophan to niacin. they are designated by the same letter as the vitamin.
Canker sore
A type of oral ulcer, which presents as a painful open sore inside the mouth or upper throat characterized by a break in the mucous membrane. its cause is unknown. ...
Thrush
A small or medium-sized songbird, typically having a brown back, spotted breast, and loud song
Herpes
Any of a group of viral diseases caused by herpes viruses, affecting the skin or the nervous system
Geographic tongue
Condition of the tongue affecting approximately 3% of the po

where to begin is always puzzling. my way is to go to the beginning -- begin every story with the Big Bang.  or before the Big Bang. 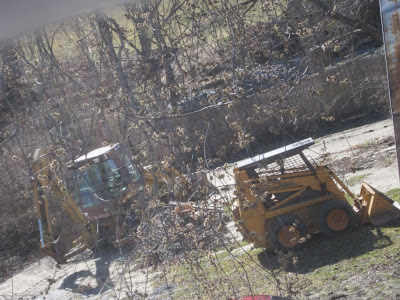 when the glaciers slowed they first dropped boulders, then rocks, then stones, then gravel, then sand, then silt.  you can see this along river valleys especially where the gravel and sand are being excavated commercially.


when Irene riled up our rivers, they tore out their banks (and a few houses, many trees, roads and bridges) and carried them off.  as they slowed, they let go of it all.  first boulders, then rocks, then stones, then gravel, then sand, then silt.  you can see this in my back yard. 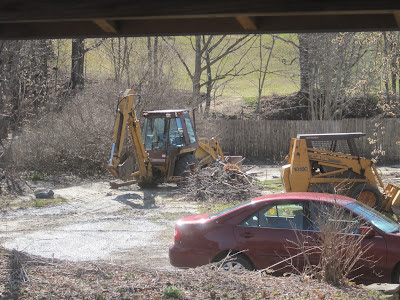 spring came and the snow melted and what to do... have a rubble strewn sandy weed lot impossible to mow or rake, or git 'er fixed.  i'm not fond of close living with snakes rats ticks, plus we may want to sell this house someday.
and so...after making a short story long -- my Arthur Dent moment.

The word bulldozer wandered through his  mind  for  a  moment  in
search of something to connect with.
The bulldozer outside the kitchen window was quite a big one. 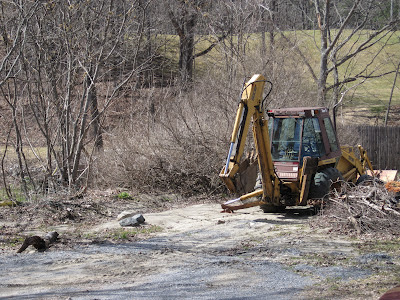 they arrived first thing in the morning before i was even up.  by noon 10 dumptruckloads of sand had been removed and they kept at it for the next few days, piling rocks at the side where the stone wall was. now days later, we have a level 1/4 acre waiting for grass seed to grow through the straw.
No comments:

a visitor recently observed that Barney has an unusually expressive tail.
it's true!  not only expressive, but quite long and useful.
we actually measured to be sure it was not an illusion.  his tail is about 2" longer than Hank's.
here's a picture of Barney using his tail for stability on a narrow shelf. 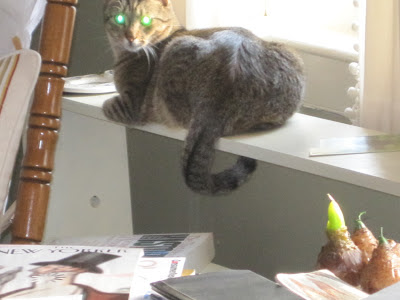 all the world's a meme

lately i'm thinking all words are memes.
and all objects too maybe.
anything we've learned a shared meaning for and then passed along.  you know?
so how is "the cake is a lie" different from when i first learned the word "serendipity"?
it pleases me to find phrases that will be perfect for many different circumstances.
usually i use one for awhile but then forget all about it.
my goal is to not have to come up with an original appropriate response.
or just to be gleefully annoying perhaps?
here are the few i can remember that i've used and then forgotten about;
get over it
that's what you say now
so it's come to this
that says a lot about you
feel free to use them! all are stolen from somebody else anyway.
No comments: