the sun is coming back?

the sun came up early yesterday!
made a believer of me
spring is a long slow dance -
step forward, step back
and mud mud mud
meanwhile, speaking of mud,
mudpie put pots of herbs at her tiny houseboat window,
even tho Raglan Shire is still covered in snow.
feels good to see them there. 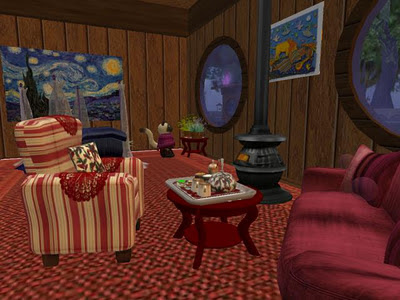 let your smile be your umbrella - my birthday version!

let your smile be your umbrella
let your grimace be your shoe
let your smirk be your sombrero
and you'll find a love that's true
let your frown be your long underwear
and your sneer your pocketbook
let your grin be your ballet shoe ribbon
then you'll know you're off the hook!


I thought of this poem in my sleep last night and wrote it down when I woke up this morning!  A good birthday poem!
(You have to stomp and clap to the fiddle and banjo, and join in on the chorus)
1 comment:

sooo many books!
one day we go through the ones on the living room shelves
our oldest shelves, that daddy built for us
when we first bought the house.
this book donate to the library, this to the swap shed, this - trash pile!
have to search thru the give-aways for bookmarks -
we tend to use what comes to hand
eviction notices, love letters, photographs, blade of grass, strip of newsprint
omg - a bumper sticker marking a place in a really big book.
ok we have lots of bumper stickers
but this one!  we could sell it on ebay... or ...
put it on the car! 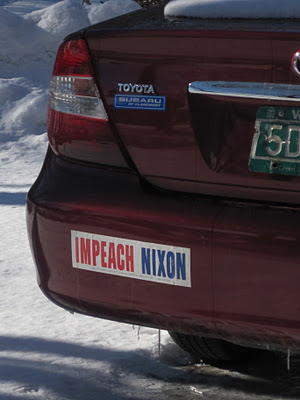 one of my neighbors has a new hood ornament on her jeep - the bowler from a bowling trophy!
she told me she got the trophy at the dump -- there's a shed for sharing good stuff you don't want but don't want to throw away.
i was amazed because i also had a bowling trophy i got at the dump years ago!
(it's also where i got the Buddha that sits on my shrine even to this day)
i've had lots of fun with my trophy, sneaking it onto the office shelf with all the awards.
visitors will remark "I see the company has a bowling team!" to the confusion of whoever they've come to meet with.
but i was ready to give it up, so i gave it to my neighbor to put on her other jeep!
now she has matching male and female bowlers guiding her way down the road.
No comments:

this came to me with the information that Penelope is now a bunny.
then later i received an update that it is not actually Penelope but some other cat that looks like Penelope.
you can believe what you want. 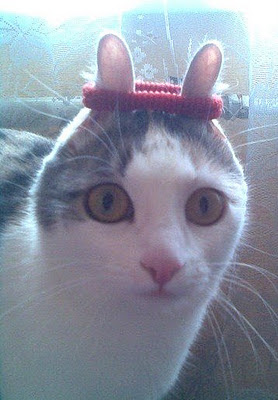 my cat was was a retriever in his last life, maybe a black lab.
with tiny toy mouse in mouth, he comes to me and drops it on my feet.
impatiently, clawishly, jumponmeandmesswithmylaptopishly he waits for me to pick it up and throw it.
and he brings it back fast!  barely does it leave my hand and he is ON IT!
tiny mouse in mouth, he trots back to my feet.
again and again.
it isn't fair!
i keep cats to avoid such doggy demands.
No comments:

after the floods i needed some escape from the strangeness and disorder and difficulties of for example no running water.
many friends and strangers were helpful in many ways.
liz brought me a bag of books!
thoughtfully chosen, each different, each thoroughly enjoyed.  i met a couple of new authors and lots of laughs and new ideas.
only one could i not get into and i may try it again before i give them back to her.
here's what she brought:
The Thread that Binds the Bones by Nina Kiriki Hoffman
The Anvil of the World by Kage Baker
Hunting Party by Elizabeth Moon
Howl's Moving Castle by Diana Wynne Jones
The Atrocity Archives by Charles Stross
Zodiac: an Eco-Thriller by Neal Stephenson
Monstrous Regiment by Terry Pratchett
The Android's Dream by John Scalzi
.
No comments:

by the time i got around to taking a walk it was coming on dusk with a brightening moon.up the hill, around the block, past the small mill pond, then down dark backstreet where coming towards me were 3 burly young men -- big boys really -- with blades and sticks!  heading for the mill pond...  hockey sticks and ice skates.yes boys still skate on mill ponds. a good winter for it this year, very little snow so they don't have to clear 2 feet of the stuff off the ice. on my way back, they are bearishly hockeying around their net at one end of the pond and at the other end a daddy is helping a tiny girl on tiny skates, while mom with baby on back photographs the scene. such a patient dad...whatever happened to "put a pillow in their pants and give them a shove?"i get home before dark, thinking of the amazing time i skated on mulder's pond, round and round in the dark with all the stars blazing overhead.
.
No comments:

Osprey:  I am using virtual worlds as my condiments.
3 comments:

what Barney cat-typed while i was AFK on the phone:

looking in looking out

a burst of birds flies
through my email - behind me
they pass my window
~mudpie
No comments:

apparently tea can get moldy.
even tho it is merely flavored water.
esp if it is left in a pot and the pot is put away in a cupboard for
say a month or two.
No comments: