a mystery picture appears in the alumni magazine - a girl on a skateboard. barefoot, madras jacket, flying down a campus sidewalk.
the magazine asks "If you know who this girl is please let us know."
the grainy black & white picture is from the 60s, like 1964 or 1966.
who knew from skateboards!
someone knew.
someone's surfer brother had made it from rollerskate wheels.
sister brought it to college and mostly just rolled up and down the long halls.
sister's pretty blond barefoot friend tries it outside on a gorgeous day
on a looong sidewalked hill - a smile of delight on her face, hair lifted by the breeze -
someone took a picture!
years later the picture turns up!
now the secret identity is revealed.
girl becomes famous - the girl on the skateboard!
eventually a book is written, a stage play, then a musical, then...hollywood!
at the oscars, many years later,  the actress strides across the stage to accept her award.
an overdressed crone in the audience lifts herself up by her walker and yells
(this is the sister yelling - see paragraph 3)
"IT WAS MY FUCKING SKATEBOARD!"

hold still for just a minute will you?

it isn't like her she's never done this before,elizabeth taylor

i'll be changing my hairstyle

at the reading,
the good poems were by poets
with weird hair

what do you say to a dead man?

i fell in love with Warren Christopher yesterday
npr's website said he died
i knew the name. i clicked the link
i saw his picture
my heart burst with love
an old man 85
a good man
he tried - he worked so hard
he did so much
his heavy spirit clung to me
i held his spirit i didn't know what to say
it would not leave me
my heart was so full
i said what little i knew
or understood
of how to guide the dead
he would not let me go
i need to learn more
in case this happens again
i tried to send him off
to people who know how to help
in these situations
but the love between us was so strong
at last i remembered that today
i am going to a friend to work on a project
a friend who knows
who can guide the dead
or the living for that matter
my heart grew lighter then
and i wrote this
No comments:

early spring call of the human

redwingzarback!
bright and sunny today - March 8 - and a fresh new layer of snow.
nothing is whiter than snow -- snow defines white!
yesterday morning, shoveling the walk,
the snow heavy, wet spring snow,
falling and falling even as i shoveled,
wishing i was not doing this,
but knowing anything else i might be doing
would be equally if not more meaningless,
like i'm not going to be discovering
a cure for cancer or anything like that...
i suddenly stopped.
could it be?
am i hearing that unmistakeable sound of spring?
yes it is - a red-winged blackbird song.
and now another.
not a flock mind you, but just the few crazies who risk all to be first arrived.
when their gamble pays off, they get the best land and the best mate months later when the girls drift in.
smiling, i call my hubby, using the spring call of the northern human "redwingzarback! redwingzarback!"
soon our call will be heard all over town,
in the store and the post-office,
on the steps of the library...
"redwingzarback!"
No comments:

Arches in the Mist at UWA's Virtlantis
Blue Tsuki's installation Vessel which closes today.
"Before you is a concentric landform of unknown time and origin. It appears to bear witness to an ancient artifact in the sky known as the Vessel. Walk the circular labyrinth to the center where you will find teleports to the Vessel."
they don't mention that the labrynth is more fun if you are riding your horse, and the Vessel above is way more fun if you are on your unicycle! 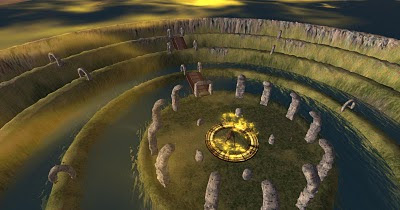 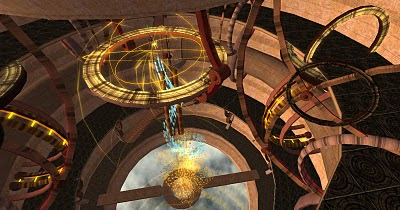 a dream of pigs

i dreamt that some men in a couple of boats were pulled up in the shadows across the river to watch a huge white pig that had escaped as pigs so often do, swimming away from the near riverbank encampment of naked beautiful dark-haired women , one or more of whom would soon notice and be coming to chase it back to their compound.
no doubt this is a very obvious and common sort of dream...which can be interpreted to mean....ah would you like to guess?
No comments:

by Abraham Verghese.  a good read, as they say!
long and involving with the depth and breadth of the truth of human existence and emotion mostly found only in fiction.
complicated characters living as the best humans they can be considering where and when they live. ethiopia. which i didn't know when i started reading.
and coincidentally, friends of mine had just a month ago moved there from here.
No comments: