after raking the leaves together
i sprawl flat pulling them over me
the ground is cool under me
the leaves are warm over me
using awareness of quantum physics
i dissolve myself into the ground
my hair and skin crisp up into leaves
all colors red orange yellow purple magenta
i am the earth and the leaves
and the wind that blows them into the sky
only a damp spot remains
and soon it's gone
nothing is left of me
i get up and walk to the house
and make coffee
No comments:

i live in a calendar

i have hundreds of pictures of autumn. but walking around the village today is so beautiful it hurts.
can't eat it or fuck it or snort it or wear it, can't poem it or paint it...
i could lie down and die in it but instead i get out my camera once again!
(click to enlarge and walk right in!) 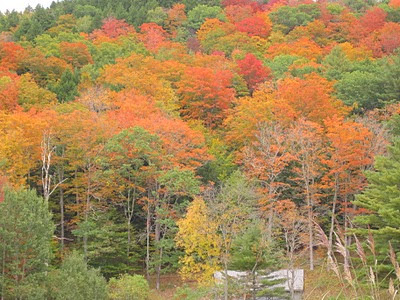 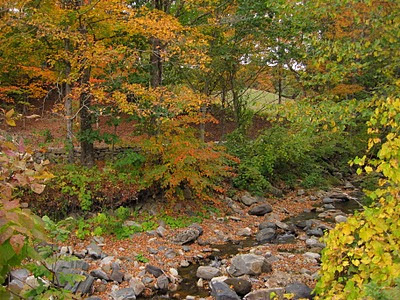 My heart is warm with friends I make,
And better friends I'll not be knowing,
Yet there isn't a train I wouldn't take,
No matter where it's going.
~Edna St. Vincent Millay


kathe's mother wanted to go on a train ride.
they didn't have to ask me twice!
the stationmaster had a nifty contraption (oh goody!)
to get her into the train car with her walker.
these trains go every day, and even so
people here wave to the train.
occasional kayakers on the river - they look up and wave!
later some canoeists - they wave too.
the practicing crew team ignores us.
man in motorboat with live dog as figurehead - man waves to train.
dog barks!
people wave from an island in the river
and from an estate across the river.
(were they really playing croquet?)
some cute kids on bikes waiting at the crossing.
they wave to us.
a large man in a tomato field waves
then turns back to his task
bending over broadly - we giggle.
a muscled young man with two ginormous horses
working a vast field of sunflowers -
he stops and smiles and waves.
i try to snap a photo of him the horses but
we zoom on by and i get a large bush instead.
when they give you your ticket
they should include
a white hanky to wave out the open windows.
.
No comments: 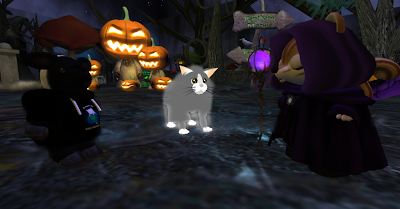 exploring a great hallowe'en sim with 2 friends - it had everything! most frightening of all -- the clowns in the haunted nursery! be sure to go to Bentham Manor in Sevenfold!
2 comments:

i can haz fluffyness

i have an adorable new avatar which is a fluffy persian kitten. 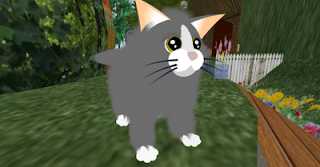 a manual came with it, so it may have some animations or tricks i don't know about.
here's what the manual says.

"mommy, jesus told me not to use the downstairs bathroom. there's something bad in there" said 5 year old -- let's call her 'joy.'
they are visiting my house for xmas: joy, her mom, her mom's sister with her hubby my brother and their baby.
joy's mother reassured her that she herself sat in the downstairs bathroom each morning and read her bible, and it was a perfectly ok place.
but either to allay the child's concerns, or their own, i don't know which, it was decided to hold an exorcismic sort of gathering that evening.
when the time came, my hubby went off to bed grumpily and the rest of us sat down in a circle in the living room.
then reassuring prayers and praise were offered up to a loving god, and angels were set over the house to guard it. it seems to me the angels were very tall - 60 feet? or am i confusing it with a movie i saw.
all of this happened years ago, but many times i have thought of those angels i don't believe in and of how comforting it is to have them there, and how happy and trouble free we have been in this place.
the little girl, grown now into a woman, was killed last week in a car crash somewhere down south.
i am so sad.
1 comment:

who let you in my dream? was i in yours?

i dreamed
there were small rooms many boxes
piled everywhere lots of people
much activity
new michael
sang without stop
all bob dylan songs
he knew all the lyrics perfectly
i said to him
we share a gene
for remembering lyrics
he smiled enigmatically
a delivery man came in
tall wild haired it was duane carleton
brought many more boxes
he and new michael
hugged and thumped
in masculine affection
and it was then i realized
they belonged to the same cult
each member had to learn
some important body of knowlege
to save it from
the destruction to come
new micheal's job
was to learn all bob dylan songs
in my dream
i knew the name
of their organization
LOFTUS
now awake
i invoke google
it gives me a site that sells rubber chickens
which i have been needing
since our kitchen remodeling
when my old one got thrown out
No comments:

i go to the woods

and stayed alone in susan clarke's wonderful cabin to meditate.
it was so amazing.
here are some pictures i took.
the music is used by permission of kourosh dini http://lifeinmusic.org/sky-lily/

on the doggy internet everyone is a dog

i'm digging a hole in the compost pile and our next-door dog is lying relaxed nearby on her property.  at first i feel bad for her because it is overcast damp and chill.
then i realize she has a coat meant for somewhere like the arctic! she probably feels we finally have some nice weather.
but she is tied out alone poor thing.
she barks. i look up. she has not moved, just a couple of deep loud laid back "woof"s. my ever-alert mind informs me that just previous, without my noticing, a dog up the valley barked just like that. Stella was merely commenting or replying, perhaps to a chain of dogs up and down the valley. she is not alone!
she is hanging out. not texting exactly, more woofing i suppose, with her friends. reminds me a bit of Rat Thing, one of my favorite creations of Snow Crash.
at the same moment it dawns on me that the bluejays are doing something similar, but with them, it is always crisis time!
No comments:

walk up main street turn on tyson road
walk down back street past mill street
until it meets up with main street again.
i was going to snap chairs,
but got interested in porches too!
No comments: