this explains everything -- really!

an earwig whose life led it into my kitchenand onto my counterlay dead in some honeyleft in a small glassovernight on the counterfrom soothing my throatthat was sore from my coughingto dislodge the cheeriodrunk from my tea.the cheerio was on
the spoonful of milk
from my cereal i add
to my tea every morningbut this time a cheeriogot in and choked meand made my throat soreand the honey that soothed ithas killed this small earwigand there you have karmain case you had wondered

one of my friends has to get a new washing machine, so i've been surveying other friends to see what they have and how they like it. of all the choices, it seems my Second Life washer is the best! 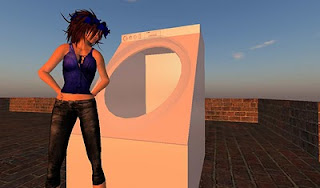 it's attractive, easy to operate, never breaks,
plus it does your clothes, your hair, you, even your shoes 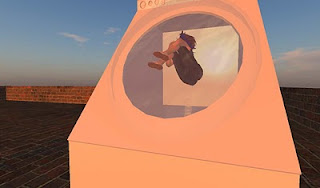 it uses very little water, and is LOADS OF FUN WHIRLING YOU AROUND
until it spits you out along with some bubbles 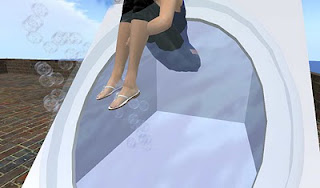 all clean and refreshed. 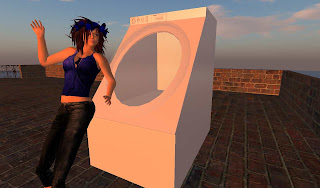 the brand seems to be Surprising Laundry, and on top of all that, it was FREE!

no no no not the crickets!!!

heard the first one yesterday. you know what it means...summer is coming to an end. my heart always sinks when i hear the first cricket, just when i am getting warmed up finally!
i can't help but remember Charlotte's Web:


The crickets sang in the grasses. They sang the song of summer's ending, a sad, monotonous song. "Summer is over and gone," they sang. "Over and gone, over and gone. Summer is dying, dying."The crickets felt it was their duty to warn everybody that summertime cannot last forever. Even on the most beautiful days in the whole year--the days when summer is changing into fall--the crickets spread the rumor of sadness and change.
1 comment:

postcard from the vacationing blog

i am like a god! a carelessly destructive one, as most seem to be, whose purposes are unfathomable to the creatures whose lives i disturb.
six cords of firewood for the winter were delivered and dumped in our driveway a month ago.
most years i would be stacking it in the garage, whenever so moved, not rushing, enjoying the process, but not this year.
john has promised the job to the kid (the one who mows our lawn) and arranged to pay him by the job. is it my bit of scottish DNA playing up that keeps me therefore from moving so much as one piece? perhaps i could divide the number of pieces into the quoted price and subtract each one i move?
today i had to relocate a few pieces to weigh down the tarp over the lawn mower. (i've learned not to say tarpaulin, as i have gone into stores to ask for this and been told they never heard of such an item).
as i said, the wood has been there a month now. i picked up the first piece, at the edge of the pile, and there, curled under it, was a red eft, surely one of nature's most sweetly innocent and vulnerable looking creatures. i carefully replaced the wood feeling like i had done something bad.
as i went on choosing and removing pieces, i caused monstrous upheavals in critter land. entire nations of earwigs... mothers, fathers, babies... were sent screaming in panic in every direction!
ants of course live and store their eggs everywhere, and can hardly be avoided being disturbed with every step. it doesn't help to know that ants will die if lost from their family of sisters, and that earwig mothers actually watch over their young until they grow big enough to fend for themselves.
the slugs...well i'm not sure if they were male, female, both, child or adult, and i'm not even sure they noticed that the log was moved. i have read that slime mold is quite intelligent, but i don't know of any research involving slugs.
No comments:

for his children to play with, he carved 3,500 individual pieces from scrap wood and hand painted them in his spare time over 40 years. that's the Kirk Bros Circus by Edward Kirk. this includes the animals, the aerialists, the pop-corn vendors, wagons, tent poles, and the audience, and more, each individual...and the arms are attached, not clothes-pin style! the Shelburne Museum has this on display - it's huge! 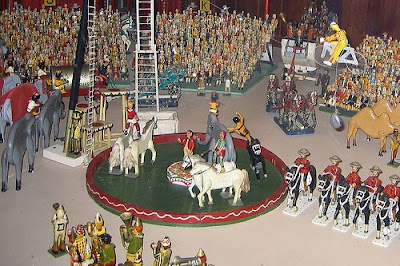 the museum also has the most amazing collection of over 500 old circus posters, too!

and if that's not enough, it has Roy Arnold's miniature carved circus parade, scaled 1' = 1 foot, and it is 525 feet in length. Shelburne Museum has a special building dedicated to it so that you walk through a curved narrow building unable to see ahead too far, as if the circus were coming along past you. there are 400 horses, each individually carved. and very ornate wagons for each performer or animal! one wagon, based on a real one, has 40 horses pulling it. the real one had reins that weighed 72 lbs!

i wish i could find an online in-color picture of a particularly ornate colorful poster with a great deal of captions using all the literary devices known to circus, (hyperbole, aliteration, testimonials) to entice the customer -- it's Minting the Marvel who rode his unicycle up and down a steep high spiral in the Adam Forepaugh and Sells Bros circus...the MOST HAZARDOUS JOURNEY EVER TAKEN BY MAN! hah...he wasn't even knitting!
1 comment:

a perfect day for the company summer outing! we spent the afternoon at the lake with burgers and hotdogs and potluck salads and desserts. a bright warm sun, the sky blue with those fluffy decorative clouds, and the breeze was cool and steady. we had horseshoes and vollyeball, and some of us went out in the park's pedal boats. willie's wife didn't want to pedal, so i went with him. after a tour around the lake looking at some of the houses, we pedaled out to the middle and sat in the sun for awhile. something reminded me...willie has a pacemaker and a heart condition.
"Willie" i said "should you be doing this? you could have a heart attack."
"i could!!" he said brightly.
"well what should i do if you have one?" i said.
"nothing." he replied.
"do you have a DNR?"
"yep."
"well, ok then."
No comments: