the van a the neighbors' probably wasn't robbers, or they would have backed into the driveway.  the next day more trucks and people, and something clearly was going on. those neighbors are off in Florida keeping warm during the cold months. and they aren't the type to have someone remodel their house without them there to keep an eye on the doings! 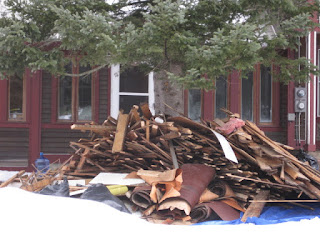 eventually a huge pile of wood, insulation, flooring, grew in their front lawn. the sad story is that their furnace broke, and when their daughter came to check on the house, the pipes had broken, the downstairs flooded, the water froze, and what with the ups and downs of our weather as the sun returns, things even began to get moldy.
No comments:

mudpie has not heard back from the folks who requested her fake 'prescription'  placebos.
are they taking them as directed? are they working?
or did they sit them on the shelf as a cute conversation piece (bah).

she has a brilliant idea, and several requests for ... ta da!...
assisted suicide placebos
(it being February and all)
but is nervous about actually giving them to anyone.

if you believe in the placebo effect, well, what would they do??
No comments:

often people become more 'spiritual' as they age.
the usual explanation is that they feel the approach of death.

but i think it's expanding awareness.

picture my baby son at the ocean.
the infinite sky, the endless beach, the limitless sea.
what did he do?
picked up nearby cigarette butts.

as children our area of awareness is so small, because everything is new.
once the nearby is familiar we extend our awareness out another step.

awareness expands and grows as we age and become familiar with a wider and wider circle, until it reaches and then includes the unseen, the felt, the sensed world beyond our 5 senses, the world we maybe scoffed at in our body-centered youth.
No comments:

liz made some teeny tiny books to sell at the xmas craft fair in december.
they were so well made, with such good quality paper, i had to have one.
even tho she had added a ribbon to hang it on the xmas tree,
which is not something i do.
but they were so wonderful, i got one anyway.

after xmas i realized i could write in it if i wanted!
what if i wrote in one every year, what happened on xmas?
what if i'd started this years ago?

as the chinese saying goes "the best time to plant an apple tree is 10 years ago.
the second best time is now"
or something like that.

well it turned out the darn thing had like 40 some pages! (each page had 2 sides)
here's the first 4 pages (i only wrote on one side) 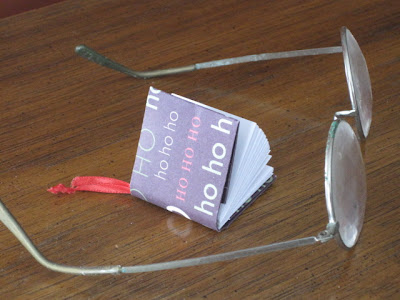 from "brushes with" by emily toder
the last 6 lines of the book:

(reprinted here without permission! sorry! but her little book is a favorite of mine, and it comes from Tarpaulin Sky Press)

suddenly i remembered the feral clothing museum that Osprey created in Second Life, and i wanted to add a picture of it because these lines remind me of it.  but alas, the museum is gone, vanished in whatever mysterious disaster  took away Cowell and Salazar as well, and i can't even find any old pictures of it!

no sewing class or instruction addresses the subject of CATS, but they ought to.
this is not an acronym.  i mean those small furry creatures.
they love to be involved, and they make me laugh so much!

i appreciate their holding down the fabric while i measure or cut.
...until they decide that ...
a. some of the pins would look nice dropped in their water dish (try catching a cat running off with a pin in his mouth!)
b. the voices in their head are telling them there's a mouse under the fabric.
c. it might be useful to find out how much thread is on that spool on top of the sewing machine.
d. it's cool the way things drop off the table when you push them.

there may be more rules, but meanwhile, here are my helpers: 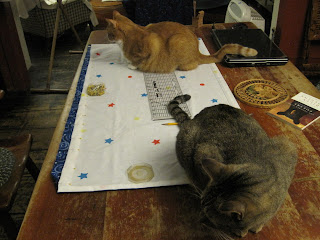 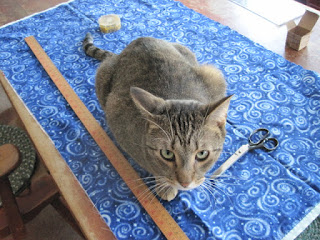 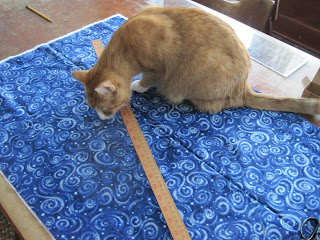 HAIR as it should be

youtube has a video of GWU performing HAIR -- the real HAIR!

if you've heard the soundtrack or saw the movie, you couldn't guess what an uproar HAIR caused.
it went all the way to the supreme court!
frontal nudity, obscenity, flag desecration for starters.
banned in Boston and nearly everywhere else in the world, too.
(i did manage to see it in Boston the one pre-opening performance before it shut down).

the movie of HAIR is cleaned up and has good music and beautiful people, but it just doesn't have the raw energy, joy of life and in-your-faceness that make the real thing so thrilling. not to mention the missing songs.

HAIR's the explosive expression of a dream of a better world of love, joy, and beauty, back when the government was trying to kill us, before iphones, before AIDS, 'the pill' was new, before women realized...well, but you know all that.

the GWU performance on youtube is like going to the theatre and having really bad seats for a really good show.
even so, it's wonderful to see it as it should be, young, raunchy, rude, crude, defiant, youth in love with life, body, self, and each other.
the music is great, especially if you already know the words. i wish their audio-visual department had been up to par with their theater department!
No comments:

tiny women stand up and dance!

mudpie joins with other female tinies on Raglan Shire's beach to dance for women's lives! 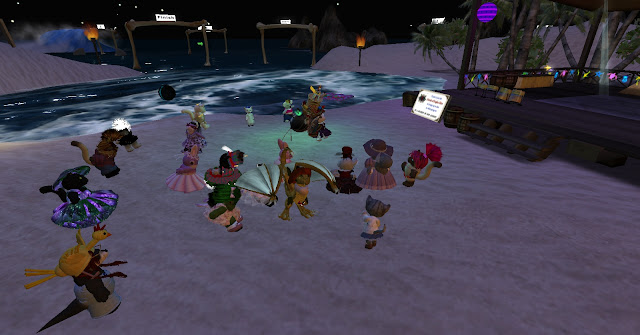 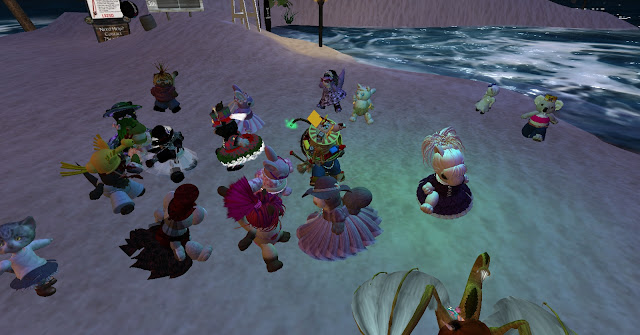 Petlove Petshop is making a video for the One Billion Rising campaign, part of second life's participation in this call to action to end violence against women and girls.
not that violence is a problem for tinies, but out of solidarity with our biggie and real life sisters!
on February 14, 2013, men and women in Second Life will join activists, writers, thinkers, celebrities, and people across the world to Walk, Dance, and Rise as a show of unity, individual strength, and the need for change.

stopped at the light

up the hill strung out along the sidewalk to my left some people come striding along in the cold, chatting happily.

without a pause they walk off the curb and cross the road in front of me,
of course, just as the light turns green.

to myself i mutter "may we reach enlightenment at the same time"
and at that one of them looks up.

she waves to me and mouths "thank you!"
and it makes all the difference.
No comments:

longest of the months
yet having the fewest days
february is

february! (apparently pronounced feb-yoo-wary) here in winterland seems like the longest month.  maybe that's why it has so many holidays.

there's Feb 2nd, one of the halfway holidays between the equinox and the solstice -- the sun is halfway here!!
of course this is groundhog's day, the day when we badger a woodchuck.
it's also Imbolc (from the belly) or Brighid's day.
could also be candlemas, whatever that is.

and then bring it on!! -- Valentine's day  -- on which volumes could be written!

next i think is president's day, in the USA.
a boring for sure but necessary long weekend in this month of waiting for the sun to get 3 weeks closer!

hmmm that's it, except for those odd days that nobody knows where they come from like Thank a Mailman Day and Hoodie Hoo Day (feb 20)

now and then we get an extra day in february.  this excites lots of controversy and speculation and consternation as if there is some greater meaning!

after writing this, it came to my attention that there is something of a holiday for many americans, called superbowl sunday, which has it's own special foods, drinks, outfits? and is the occasion of many parties.  party on whoever you are!
No comments: