once upon a time, before EVERYTHING was made in China, back when Amazon meant a one-breasted woman warrior, i gave a friend a gift of a wind-up painted metal duck with a propeller on his head, riding on a tricycle. just for the absurdity of the thing!
it came in a funky chinese box. this may have been common on the west coast, but around here it was totally insane.
we loved our duck-on-a-bikes and we actually played with them sometimes! such an object was not to be had in the city she lived in. so each time i visited i'd bring her one and it became her ritual gift.
new house? duck-on-bike.
birthday? duck-on-bike.
retirement party? duck-on-bike.
xmas yankee swap? duck-on-bike.
once she called me in desperation. "LUCY i need a duck for this weekend!" luckily someone i knew was traveling to that city, and left a brown paper wrapped package at their hotel desk FOR VICKI.  an emergency duck-on-bike! by now everyone she knows has one. but if she meets some new people i may get the call again.

the store that sold them no longer sells them, but i've seen them in the store across the street. 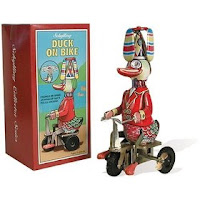